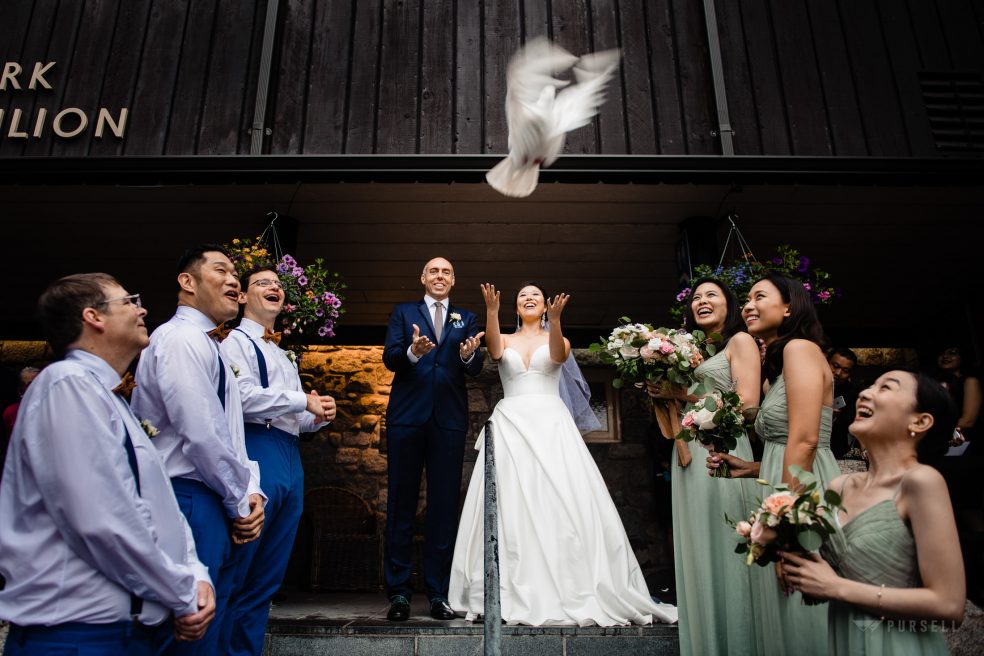 K+A’s wedding was at Stanley Park Pavilion and Westin Bayshore Hotel in Downtown Vancouver. The couple live in Japan and New York having a long distance relationship for years. When deciding on where to get married, they settled on a spot right between the two in Vancouver, BC.

For the wedding ceremony at Stanley Park Pavilion, the original plan was an outdoor ceremony in the gardens. However, even though it was summer, it goes without saying that sometimes weather has it’s own agenda, and it rained. This is where the venue really shined, and they moved the location indoors, and had a beautiful ceremony in their lounge. K+A wrote their own vows with quotes from their favourite movies since their professions are in the film industry, and after their first kiss, they went outside to release 2 white doves to mark the beginning of their lives together.

The reception was in an intimate room in the Westin Bayshore Hotel in Coal Harbour. They chose a venue that was fully surrounded by windows, so their guests could have a nice view of the Vancouver mountain skyline. It was a mid day wedding with an early dinner, speeches and a first dance. After the events, they had a farewell exit at the Westin Bayshore and the guests headed down to Harbour Air to wish the newly married couple a final farewell as they caught a seaplane to Salt Spring Island for a small honeymoon.

K+A wanted Will to join them on Salt Spring Island for a photo shoot on the dock with the seaplane. This was a new experience for us, so now we have been on a boat, helicopter and now a plane for a wedding! It was a fun experience to take photos of the couple on the plane, then a quick portrait session over on the island. It was such a fun, adventurous day, and thank you K+A for choosing us to document your beautiful wedding!