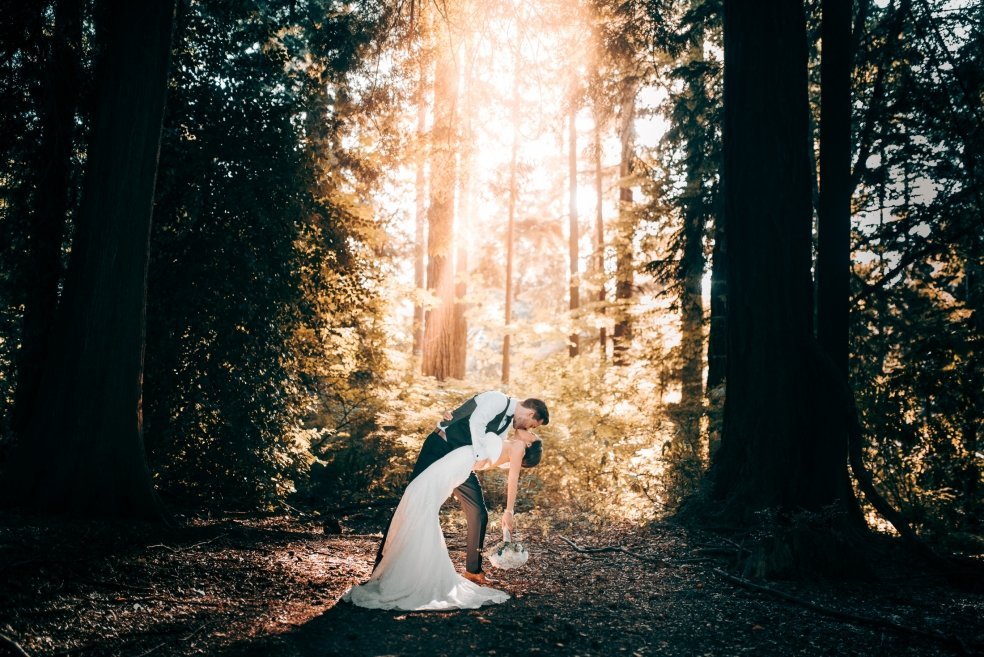 Winica and Dave had a beautiful Stanley Park Pavilion wedding. They had a garden ceremony on a sunny day in August surrounded by manicured gardens, so they went with a simple layout with white chairs overlooking Stanley Park Pavilion venue. They decided to do a first look down the aisle, and there may have been a tear from Dave. Winica and Dave went to the same high school years before and both of them admitted having crushes on each other during school but neither of them pursued it. Fast forward a few years, Winica went back to school for nursing, she used the nursing school Facebook page to look for used books. Dave just graduated from the same program, and offered her his. They met up and hit it off immediately and kept meeting up until their 3rd meet up/date where the moment they kissed it started raining. It sounds like a movie!

They both really like photos in nature, and Winica really wanted wedding photos in a forest. With the venue in the middle of Stanley Park, there was a really nice forest right beside the venue, so no travel was involved. The light was coming through the trees just right when we were taking photos, so we wanted to go a little dramatic and take advantage of those light rays coming through and used some fog to create some really moody wedding photos.

They had their wedding reception in Stanley Park Pavilion. It was nice that they had both ceremony and reception at the same location. The decor was simple and clean with white and soft grey with rustic accents and succulents. After the dinner and speeches, the party started! Dave was dancing and singing up a storm on the dance floor, while Winica was busy visiting guests and having fun with the photo booth. At the end of the night, they planned a sparkler exit and then surprised their guests with an epic grand exit when an ambulance showed up and Dave and a paramedic put Winica on a stretcher whisked her away by ambulance to their hotel. People were losing their minds!  Thank you Winica and Dave for inviting us into this important moment in your lives. You were amazing to work with. It was a great wedding and a grand exit we'll never forget!
Venues: Stanley Park Pavilion
Setting: Ballroom, Forest, Garden, Outdoor
City: Vancouver
Style: Rustic, Traditional
Season: Summer
Locations: Stanley Park
Region: Metro Vancouver