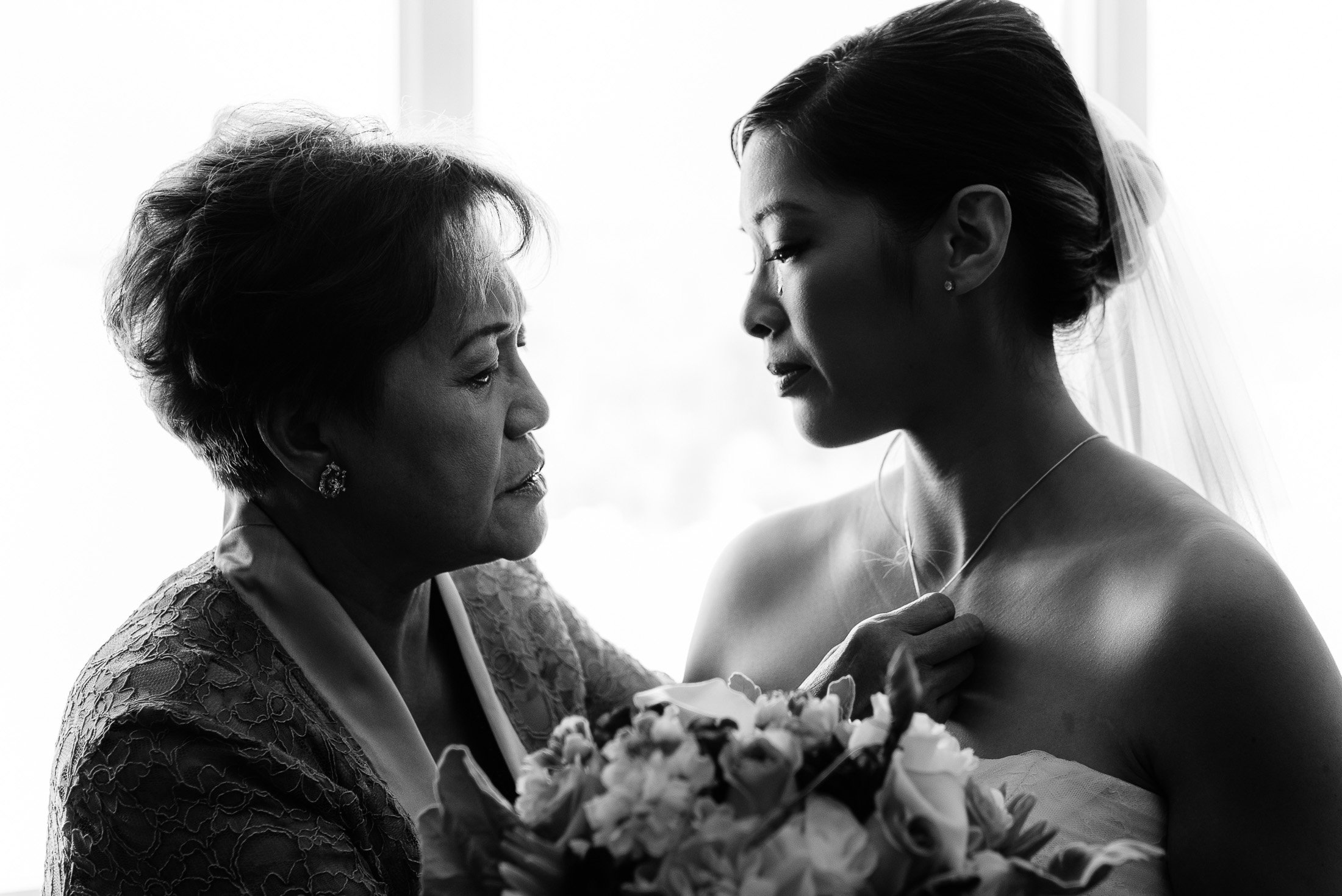 A wedding with the absolute best views of Vancouver!

Adrienne and Aaron’s Coast Plaza Hotel and Holy Rosary Cathedral wedding was one that tugged at my heartstrings all day long. Adrienne and Aaron are both shy, incredibly sweet, down to earth people, and we immediately liked them! A little bit about the couple: They first met in high school, but only really knew each other through mutual friends. Aaron had a huge crush on Adrienne, but never had the guts to approach her. Little did he know, Adrienne kind of liked him too, but was too shy to approach him. They both spent their high school at fingers length apart without ever really getting to know each other, or knowing they both liked each other! It wasn’t until after high school that they met again by Aaron bugging Adrienne's friend for her number. Adrienne's friend declined to give out her number, but told him to find her on Facebook. That's exactly what he did and once he added her as a friend, they talked everyday from that day on.

A ceremony full of traditions in an epic gothic church.

Fast forward a few years, and here we are photographing their Vancouver wedding! They were married at Holy Rosary Cathedral, one of the most popular cathedral's in downtown Vancouver. Adrienne and her family had the misfortune of her dad passing away years before, so her mom walked her down the aisle that day. There were moments of tears all day long, and it didn't stop as her mom was walking her daughter down the aisle. It was really quite emotional to photograph. The reason it's so much fun photographing weddings is that we get so much diversity with our couple's. I love when our couples incorporate both family traditions into their wedding day. A new one for us was a Native/Filipino wedding. They celebrated a traditional Roman Catholic ceremony and incorporated a Native American tradition of smudging, where Aaron's grandpa gives the couple a blessing with eagle feathers and burning sage, and a Filipino tradition of blessings with the candles, cord and veil. After they kissed, they were greeted with a native blanket to wrap around them as they walked out of the ceremony as a married couple.

After the ceremony, we went to Queen Elizabeth park for the portrait session. They chose this place for a special reason; they wanted to recreate Adrienne's parents wedding photo at the waterfall feature in the park. When we photographed their engagement session, we originally had it planned to go here, but there was a major drought in BC last year, and the plants in the park were dead, and the waterfall feature was dry due to water bans. But this worked out better because they were dressed up in their wedding attire instead of casual clothes.

Wedding with 360 degree views of Vancouver

The wedding reception was on the top floor of Coast Plaza Hotel in the west end of Vancouver, and it had 360 degree views of the city and English Bay. It was a bright, clear, sunny day, and the guests were treated with an epic sunset. Adrienne and Aaron, we can't thank you enough for choosing us to photograph your Vancouver wedding. We had so much fun getting to know you guys at your wedding and engagement session. We couldn't be more happier to have client's like you. Thank you for inviting us into your lives and having us photograph such a special moment. - Lauren
Venues: Coast Plaza Hotel, Holy Rosary Cathedral
Setting: Banquet Hall, Church, Hotel
Traditions: Filipino, Multicultural, Native
City: Vancouver
Style: Modern, Traditional
Season: Summer
Locations: English Bay, Queen Elizabeth Park
Region: Metro Vancouver